Home
Marc Bridger
Visual Artist
Portfolio
2018 | My Child Could Have Painted That!

My Child Could Have Painted

My Child Could Have Painted That! 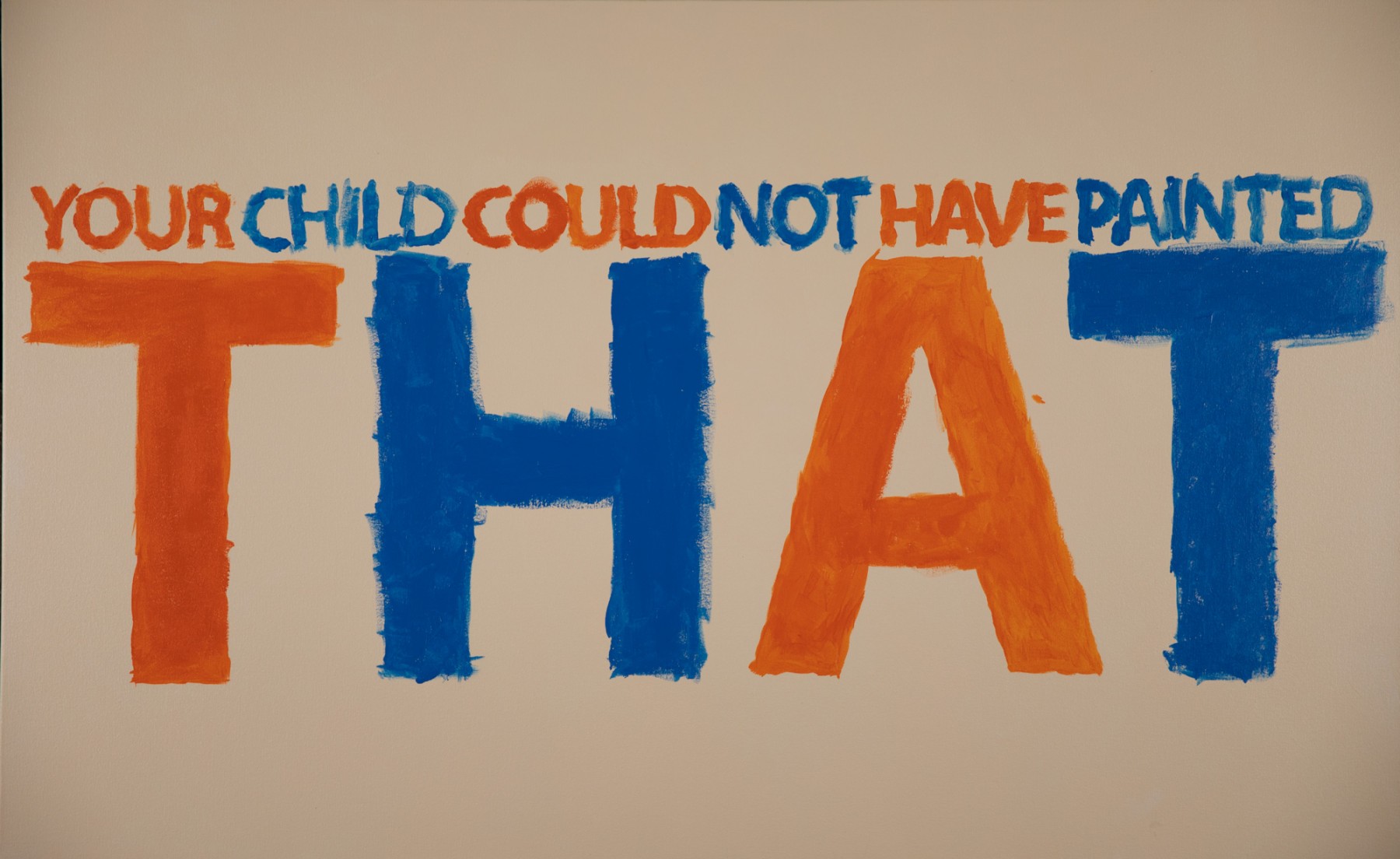 The ideas behind this work stem from a frequent reaction by a viewer peering at an artwork and asserting: "My Child Could Have Painted That!" Using the disruptive process of my own children as studio-hands, the textual painting interacts with this common proclamation and forms an argument for contemplation. While the title is My Child Could Have Painted That, connecting to the viewer and prescient of their internalization of the work, the actual text painted on the surface is as follows:

Your Child Could Not Have Painted That

There are semiotic ambiguities and contradictions existing in the piece with the word “That” as a painted signifier acting as signifier, signified, and referent. The viewer is using the signifier (word-image) "That" in relation to the signified concept of a painting, while referring directly to the referent. But this is done with non-verbal communication—it takes the context of viewing to extrapolate meaning from the word “that” and it requires the receiver of this proclamation to be in the presence of the object to gain specificity. Linguistically, the word “that” is somewhat ambiguous as its definition as a determiner or pronoun requires specificity. For example, as a pronoun one definition indicates: “used to identify a specific person or thing observed by the speaker.” (source: dictionary.com)

But, what is the title referring to—My Child Could Have Painted That? Where is the specificity? Does the title act as a prompt? A prompt for the viewer, or a prompt for the art-object? Or both? It is simply a string of text assigned by the author. Perhaps it is an index of the author's preconception. If it does act as a prompt, then the leap from the title “That” to a signified object painting is interesting. Similarly intriguing is the insertion of the viewer into a position of ownership by supplanting the word “My” with Self—the viewer projects themselves directly into the dialog. The painting (or author) could be inferred as the “My”. The word “My” is self-defining. In this sense, it is plausible that a more neutral viewer would respect the autonomy of object and title and not insert themselves into the work as an actor and participant. However, the contemporary tendency is to become the “My” in the title.

A viewer is also referring to the signifier “That” through title and content as a signified referent without a specific object referent. In other words, there are multiple simultaneous semiotic readings and interactions internalized with the word “that” as textual content in the painting. First, it is the signifier for the pronoun/determiner while also existing literally as its own signified concept and referent of the literal word “that.” But, because a pronoun/determiner can take on and refer to other objects, it simultaneously signifies a painting, represents the signifier of a painting, and is the literal painted referent of the object “that.”

Several semiotic ambiguities can be explored. For example, returning to “That”—the conflation and contradiction of title and painting content “My” versus “Your” addresses the viewer directly. As outlined above, it requires a leap for the viewer to insert themselves and take possession of the “My” role. They must project themselves into the work. On the surface “Your” seems to directly address the viewer. However, perhaps this is the same author scenario of the title as outlined above where “Your” refers to the artist that painted the object and is merely an indexical product of the concept. Nevertheless, some viewers are bound to interact with the painting in the “My” and “Your” context which is assumed and expected. In a sense, the word “that” in the title connotes a sense of disdain and scorn, disparaging the work as simple child’s play. This trivializing excoriation of art is a common facile strategy that extracts from a work a diminutive essence for critique and derision, while dismissing its art historical and conceptual underpinnings. The painting flanks this strategy using the lure of sloppy text to ensnare and funnel the viewer into this line of discourse. Thus, asserting in defense and advocacy for art professionals that, “no” "your child" could not have painted “That”. As, their child literally could not have painted “that” as it is not their idea—nor is the subsequent product of a painting.

While I employed the disruptive process of my children as studio-painters to execute the work, it is still my painting. Therefore, there is a conflation that exists in my viewership in that I can say to myself  “My Child Could Have Painted That” and in a sense, this is true. However, the content of the work (“Your Child Could Not Have Painted That”) proves truer for a few reasons. First, conceptually it is my work, not my child’s. Also, even though my children painted the signifier “That”, they still acted in concert and through direction as studio-hands executing an idea. Nevertheless, even my children could not have painted “That”—the idea and concept of the work that exists as a signifier without a realized signified concept or referent. Despite their literal participation in painting “That” the signifier, signified, and referent to the actual painting, it required conceptualization, diagrams, verbal commands, directions, and a collaboration.

While the title and content of the work provoke the viewer into a critical discussion about a common declaration in art viewership, the hope is the work not only makes several literal assertions in this conversation between viewer and work, but that the semiotic aporia that arises yields an elevated experience invoked by its conceptual arena. 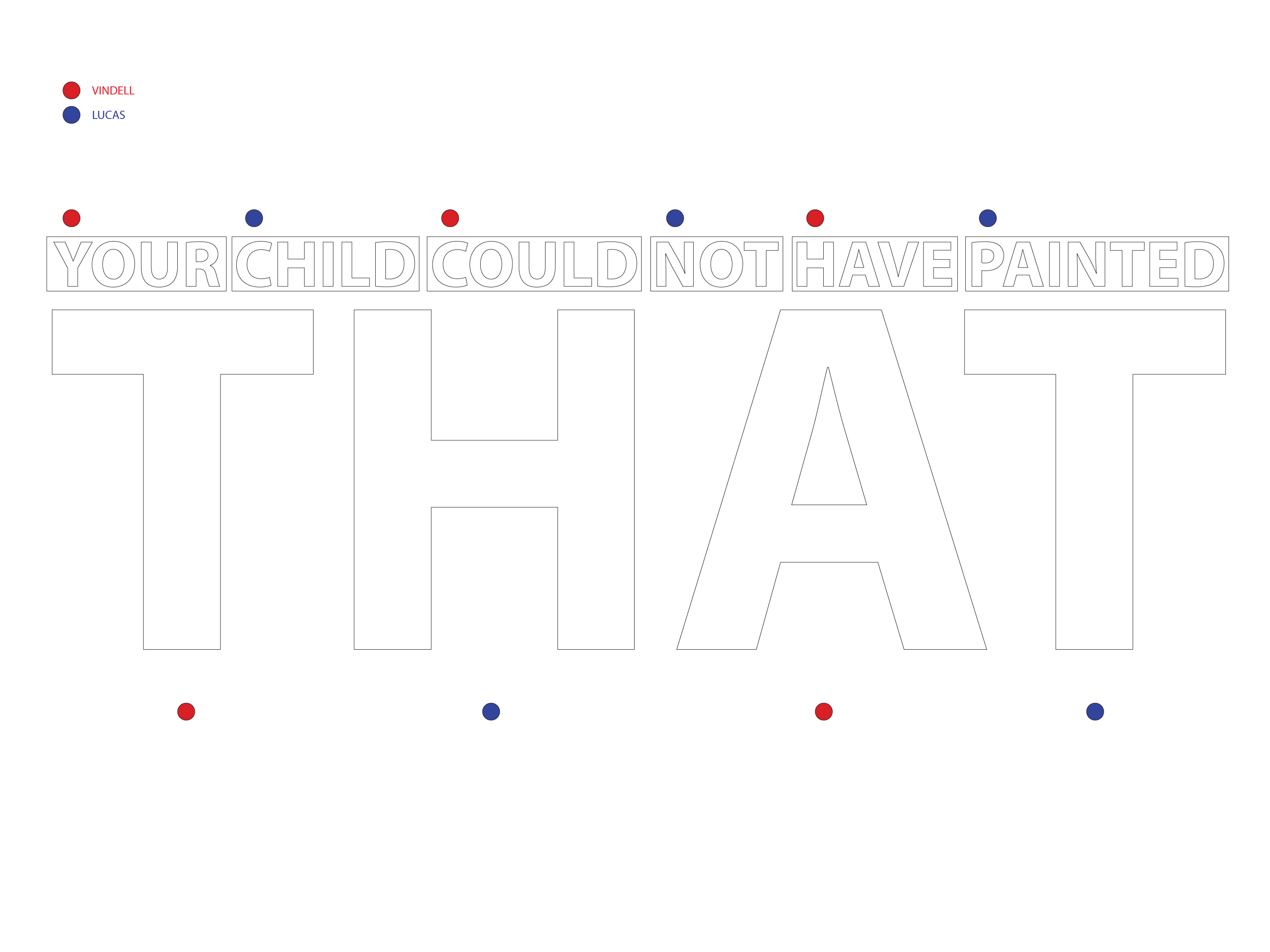 John Baldessari’s Pure Beauty (1966-68) is an influential model with his disruption of using an external painter along with a simplified canvas and pure text. Sol LeWitt, Morris, and Moholy-Nagy, are additional prominent models. Of specific interest and influence is Magritte’s Treachery of Images (1928-29) and its fascinating semiotic ambiguity. The work's execution integrated a set of diagrams and instructions prepared in Adobe Illustrator that were tailored to being easily followed by young children the ages of 5 and 8. The final diagram had the text enlarged slightly, the rectangles removed, and the red dot changed to orange. The colored dots are the visual prompts for each child. The text is presented as outlines for projection. While this helped guide the children, once they stepped in front of the projector they disrupted the projection and had to rely on memory as well as my verbal guidance to paint the letter in the proper position. I was leaning toward pure black for text color. However, because this project involves children as a subject and participant the use of alternating bright colors was considered as it plays into the “child’s play” derision. Prior to execution, each child selected a color. One chose orange, while the youngest selected blue. Permitting the child to choose their color further removed myself from aesthetic choices.

What Are YOU Looking At?

This painting extends a textual theme initiated with My Child Could Have Painted That (2018) that emphasizes a pronoun while satisfying similar interests in viewership, interpretation, semiotics, and ambiguity. 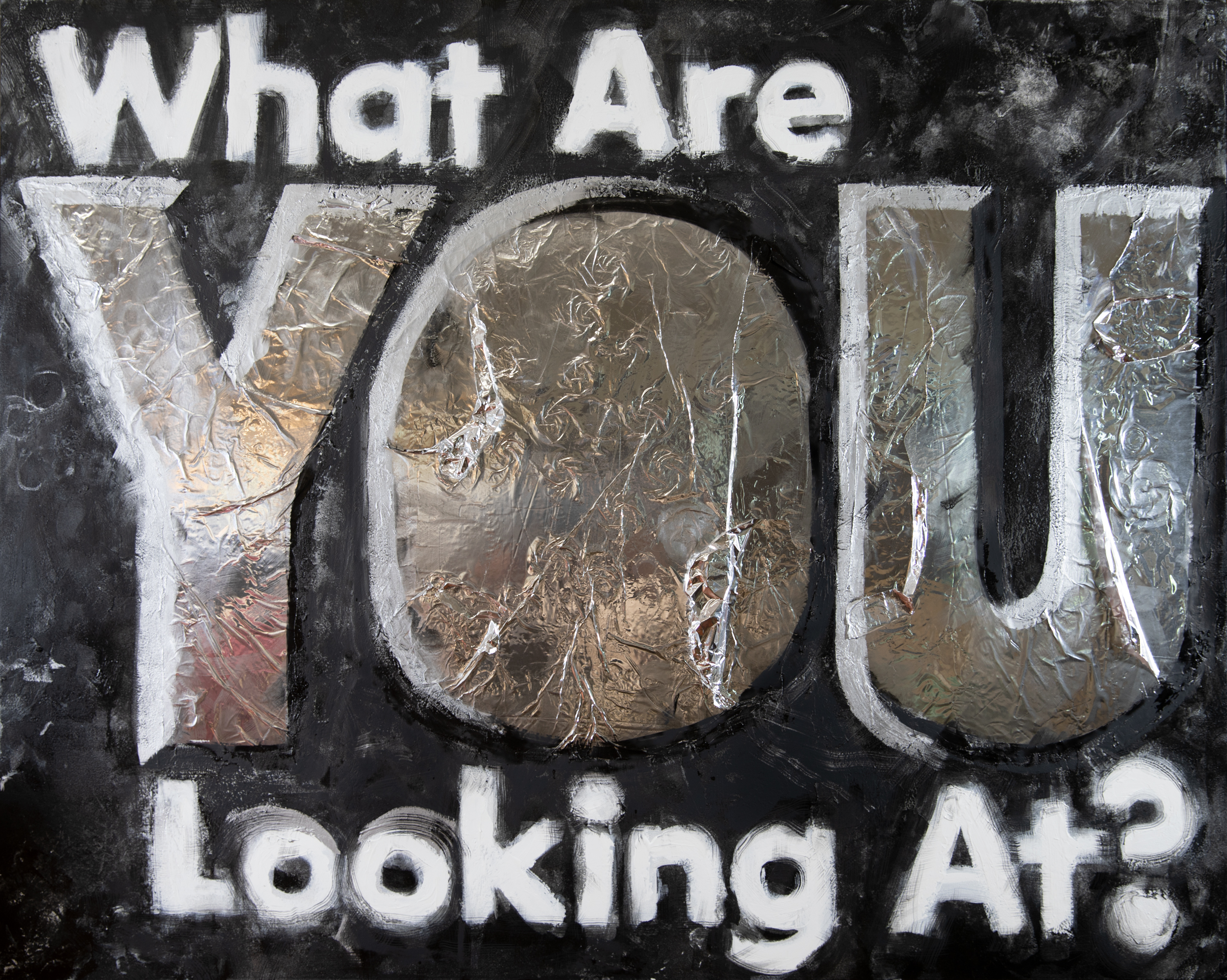 My Child Could Have Painted That

To contextualize the concepts involved in this painting an artist statement is provided for consideration.